SAN DIEGO — How do you plan for an expense that could cost nothing or more than $250,000 — and could be paid for by insurance but also may not be? That’s the challenge of long-term care planning, Vanguard speaker Ryan Donohue told attendees at the FPA’s annual retreat. What’s more, advisors find themselves battling insurance companies on behalf of clients.

There is a wide gap between those who will need to spend on care and those who won’t, says Donohue, citing data from the Department of Health & Human Services. Nearly half of people age 65 and above won’t need to pay a dime for long-term care insurance, says Donohue. An unlucky 15% will pay more than $250,000.

Medicare will not pay expenses after100 days for clients who require long-term care, leaving them the rest of the burden. That’s why 72% of long-term care users have to pay cash for at least some of their costs.

“For all that we hear about private insurance,” says Donohue, “it pays [for] only 3% of long-term care.” Clients who pay out-of-pocket cover 53% of all long-term care, according to a 2016 HHS report. 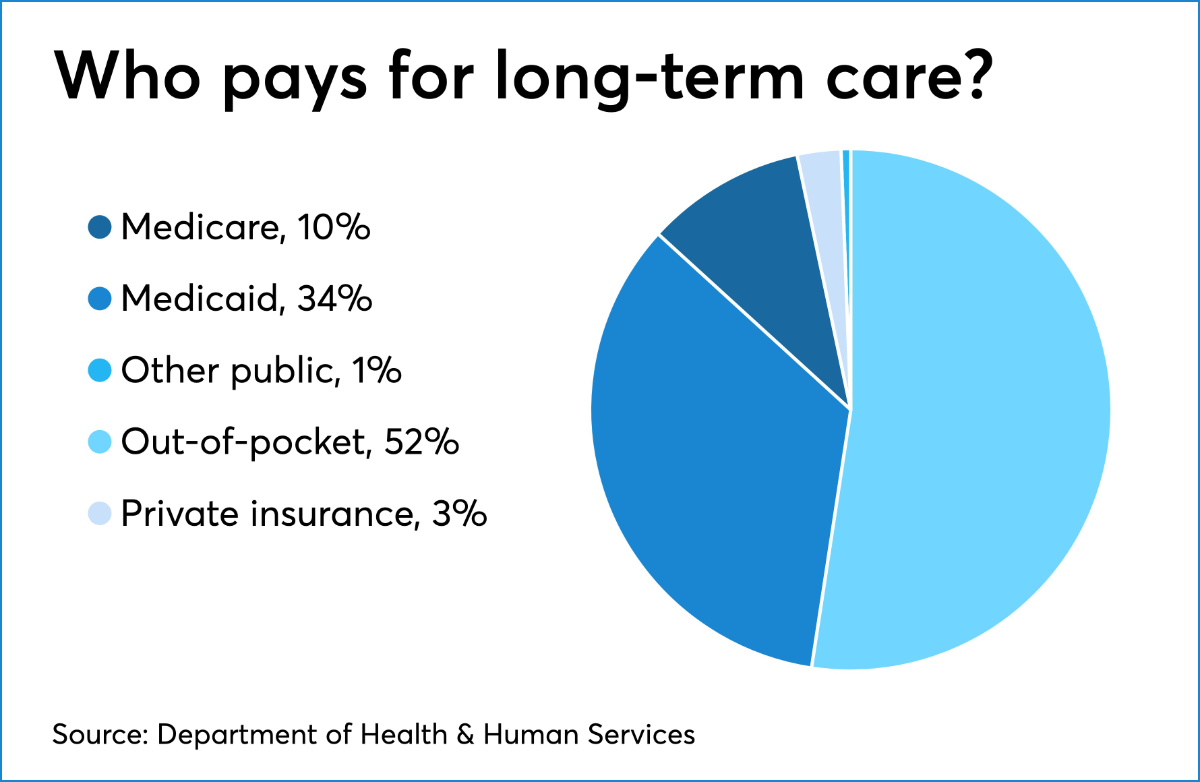 Even advisors who successfully set clients up with long-term care insurance can end up in a tough spot.

Many LTC policies were written years ago by companies that later merged or sold their businesses, according to advisor Michael Haubrich of Mount Pleasant, Wisconsin. The new carriers have one goal, he said: “We’re not paying.” He said three of his clients have been hassled by their long-term care insurance carriers.

“it’s very hard to get the benefits to be paid.”

One of Haubrich’s clients, a woman with rheumatoid arthritis, had paid $35,000 in premiums. By early 2018, she could no longer lift her hands above her chest. When the insurance company denied her claim, the client paid for home care herself until she moved to a long-term care facility in December where she continued to foot the bill. The carrier finally agreed to pay out her benefit of $234 per day several months later — after she broke her neck.

Seattle-based advisor Monica Callen has also fought carriers to pay out her clients’ benefits. The two most recent cases have included a woman with severe cognitive impairment and a man with dementia and Parkinson’s disease.

Callen says insurance companies have regularly used “delay tactics” like pretending they have not received a faxed claim from her client. Once Callen called herself, the claim was processed right away.

“If you just send in the forms and don’t harass them,” she says of insurers, “then nothing happens.”

For advisors with clients who need to file a long-term care insurance claim, Callen has a recommendation.

“Read the policy,” she says. “You need to know what the details are because they’re all different.” For example, advisors should not assume the policy pays out in reimbursements instead of a flat cash payment. There has been so much change in how policies are constructed, she says.

In any case, Callen says, “it’s very hard to get the benefits to be paid.”

While it may be difficult to plan, advisors can still identify factors that may help predict whether their clients will need long-term care. “The older you are, the more likely you’re going to need it,” says Donohue. Because women tend to live longer than men, they are also more likely to need long-term care. Being single also increases the risk, as does lack of exercise and good nutrition. Family health history can tilt the odds in either direction.

For clients who will need long-term care, the amount they pay will vary considerably by the state they retire in. For example, the average yearly cost is $250,000 in Alaska, while in Texas it less than $50,000, Donohue says. Some states subsidize health care more than others, he says, which accounts for some of the difference. Supply and demand also play a role: where there is more demand, care will be more expensive.

Contact Family Solutions For Care today at (844) 858-4500 to get the information you need regarding your long-term insurance care or help with a claim.

Schedule on our online calendar.

If you prefer, we’ll call you!

l’m sure now that she is an angel…

My siblings and I were referred to FSC by a consultant and having worked with elder attorneys in the past, we were only mildly… Read more “l’m sure now that she is an angel…”

Thank goodness for the fine people at FSC!

My mother Claire was a registered public health nurse, who took care of everyone from infants at well baby clinics to elderly people needing… Read more “Thank goodness for the fine people at FSC!”

You guys do an awesome job!

Many blessings to FSC

Excellent, thorough, and timely help is how I can express my feelings for Family Solutions for Care. I wish I would have known how… Read more “Many blessings to FSC”

I can’t express how thankful I am…

Just Want You to Know

“Oh Jeanne!!! I am crying! Thank you so much for all your work on this and talking us off the ledge several times!!! We… Read more “Happy Day!”

Hi Natalie, Thanks for all your diligence in filing my dad’s claims over the years!! You made my life so much easier, and I… Read more “Scott and Kenneth Brede”

NO time to do the backroom for LTC insurance claims

Drew said he would tell all new and existing franchise owners, “Work with Family Solutions for Care!  Why Not?  It doesn’t cost the franchise… Read more “NO time to do the backroom for LTC insurance claims”

I Can’t Say Enough About the Help We Received…

Especially our claim representative,  Natalie Vayo! (Pictured above.) Natalie has been working with our family for three years.  During this time of transition with… Read more “I Can’t Say Enough About the Help We Received…”

Thanks for Staying on Top of This!

Here is a quote we received from a client family today after our case manager had to help the thirdnew set of caregivers… Read more “Thanks for Staying on Top of This!”

My Blood Pressure is Normal Again!

When my wife reached the need for Assisted Living, I was delighted that 20 years ago we had the good sense to purchase Long… Read more “My Blood Pressure is Normal Again!”

They were a godsend for my family!

I contacted FSC in 2017 about my mother, Judy Crothers’ long-term care insurance claim based on a reference from a care provider. My FSC… Read more “They were a godsend for my family!”

I would highly recommend FSC to other communities

This professional team has been extremely helpful in helping residents in our community. They were able to backtrack payments for one resident for almost… Read more “I would highly recommend FSC to other communities”

There is tremendous value in having this service available!

A representative from an insurance company asked who FSC is and I explained what we do. She said, “’Oh wow, that’s what I wanted… Read more “What Insurance Company Employees Tell Our Team…”

“My husband’s mother and father both feel into ill health about 5 ½ years ago. We both left our jobs and moved to Virginia… Read more “Connie and Tom Ricer”

“I first heard of FSC through the Assisted living facility where my 92-year-old mother lives. My mother had been paying monthly premiums ($150 to… Read more “Larry Mock”

“I thought I was going to tear my hair out trying to figure out my Mom’s policy. FSC
stepped in to help and… Read more “Melanie K.”

“What a great company! From the beginning, Jesseca and Natalie worked diligently
to recover my mother’s claim. Always available and supportive, they helped… Read more “J. Rye”

“I would definitely recommend FSC to anyone who was dealing with long-term care
insurance policies. It can be very, very time consuming and… Read more “Vicki Barclay”

I highly recommend FSC for their help with any long-term care insurance claims. Every time I have utilized them to assist a client who… Read more “Dave Lanter – CarePatrol”

Hope your week stays good and you are blessed with happy people to help!  If they don’t start out happy, I know that after… Read more “Virginia Petter”

“After my 91-year-old, widowed father had a stroke, he was suddenly catapulted to completely care for himself again. As his daughter and power of… Read more “Ray Benderman”

“I was referred to FSC by the assisted living company. The company told me that FSC had already helped so many of their patients. I… Read more “Emma and Jimmy McDonald”

“On my first attempt a year prior to seek approval of my claim I was instructed to send various other info. I had understood from… Read more “Paula and Walt Brown”

“We have nothing but high praise for FSC. They were extremely helpful with processing our claim for my sister. “They were very prompt to all… Read more “Paul and Judy Furrer”

From the very beginning, I knew it was going to be very difficult to get my claim approved.  So I decided to go with… Read more “Arthur Tucker”

Judy Crothers and her daughter, Whitney

The team members at FSC have been a dream to work with. It has been the perfect
advocate for our mother’s situation. They… Read more “Judy Crothers and her daughter, Whitney”

We use cookies on our website to give you the most relevant experience by remembering your preferences and repeat visits. By clicking “Accept All”, you consent to the use of ALL the cookies.